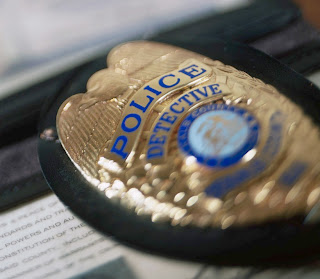 Q: Can you tell us what made you want to combine science fiction with a seemingly normal detective novel?

A: Blind Veil came in book form to me all at once.  There were very few gaps to fill in.   My stories generally find me rather than the opposite.  I don’t sit down trying to think of a story line, and then before I can finish one book, two others pop into my head.   It feels like a gift when I get them, and I feel I was born to write.  I don’t really change the plots form, though I do add fill ins and of course details, but the main plots always stay.  This book came with those elements, which I think is what makes it so creepy.  Without the sci-fi elements in the ‘real world’, this book wouldn’t have the same affect on me, and likely wouldn't have the same affect on those reading it.

I do enjoy reading thrillers, fantasy and science fiction; however, I tend to like novels that aren’t drowning in science fiction elements which require me to learn a new world entirely.  I like to read ones where the world in the novel is our world or at least something parallel to it.

I don’t really think of Blind Veil as a science fiction book because as you said, it is a seemingly normal novel, and then suddenly it isn't.  Who knew? To me it will always be a psychological thriller.

As every reader has seen, this book lags a bit in the first several chapters, which run at a different pace than the rest of the story (strange as it sounds, this was done deliberately)  The sci-fi elements aren't introduced until around the middle of the book, and even then they are slight.

This book has been classified by readers as being a number of genres including but not limited to: murder mystery, paranormal police procedural, fantasy, sci-fi thriller, crime story, conspiracy etc.   It somewhat defies standard genre categorization.  In fact its affect is real enough that people have written to me specifically to tell me how believable it is.  I take that as a tremendous compliment. That makes me feel like I did it right and hit the target.  I love getting those messages.  The only readers that I feel may want to veer away from reading this book are avid romance readers, and YA.  This is an adult book and the romance in it is slight.  There is a couple of slightly risque' chapters in the novel, but nothing at all heavy and definitely not erotica.  It is a harsh read and not meant for delicate hearted readers.

Q: When you were a police officer was there any particular moment that lead to creating this book or a specific scene in the book?

A: Well, there’s definitely carry over knowledge from my days in law enforcement.  That information has contributed to a number of things in the book… interviews, descriptions, policy and procedure, etc.  I can even visualize what Simms muster room looks like, without ever having been there (and it looks nothing at all like the muster room at my precinct).  So there are those elements.

I can say the only memory that actually led me to write a particular chapter, was my experience when, prior to becoming a cop and later a detective, I worked in the local jail.  We would occasionally get folks in there who belonged in the state hospital, rather than the jail(thought their criminal act was what brought them to the jail, they truly had no control over themselves); but for a number of different reasons (doctor’s paperwork-transport- availability, etc) we sometimes had to wait to get them moved to the state facility which was hours away.  Those individuals would be put in isolation cells and on camera and watched for their own protection until we could get them moved.  More than once, our facility housed individuals who thought that the walls were commodes.  I won’t take the explanation further, but my readers know exactly what I’m talking about in the book.  That’s the only thing that I specifically brought into the chapters as far as an event, and none of the names in the book were taken from those experiences.  There are only two names in the book that were not simply pulled from the air, and neither had to do with my law enforcement experiences.

Q: When writing I often have visual aids or music playing to act as my muse, was there anything or anyone who could inspire you or keep you motivated?

A:  I know many authors who always have music on when they write.  I am just the opposite.  I need quiet to do my best.  When I’m pecking at the keys, it’s difficult to write as fast as the plot is coming to me (and I type relatively fast, even for a writer).  When I’m not actually typing, my 11 year old daughter is always my inspiration as well as my older adult children, but in particular my 11 year old.  She’s the happiest person I’ve ever had the pleasure of knowing.

Q: With so many well written scenes it is hard for me to choose which my favorite is.  I think mine would be when the boat sank and Lamont was in the ocean. Which scene is your favorite?

A:  Wow, okay, that’s a hard one to answer.  If I have to choose, I think there are two.  I like the alley scene with the dog, after the boat trip and the one when he wakes up on Byron’s boat the second time- those restraints.  I think those two chapters still resonate strongly with me, because those were the first two times that I finished a chapter or a page and then sat back and thought ‘Wow... where the heck did that come from’?  Sometimes what ends up on the page even surprises me.  So yes, those two are my favorites.  I'll always remember that feeling.

Q: From start to finish how long did it take you to write Blind Veil?

A: This book took years, probably close to five, actually.  Today, that sounds pathetic, but when I started writing Blind Veil, I was working two jobs and a single parent taking care of two kids still, and my younger son was in college and still living at home as well.  Time was definitely an issue.  However, once I had the opportunity time wise to really focus on completing it; it took me about a year and a half to get it finished.  Now that I have time and  I know what I’m doing, I’ve written four books in a year and they’re in various stages of publication, but they should be out this year.  One of them is the sequel to Blind Veil.

Q: After publishing, do you have any advice for up and coming authors?

3.      Yes, the first one is the hardest because you will never know what you are doing (even once you've published, because then you have to learn how to market it).  With the others you write, you will not stress constantly.  At least I don’t.

4.      Don’t stress the future, or allow it to overwhelm you.  Just keep taking one step at a time until you get there.

6.      When you think what you wrote today was brilliant, and then you re-read it two weeks from now and you realize that it’s some of the worst crap you’ve ever laid eyes on?... that’s normal.  Expect it. Everything you write will need clean up, some more than the rest.

7.      Write it, edit it several times using several different editors, cover it, and get it out.  You can do this just as much as the next guy can.

8.      You know those doubting friends and family members who always offering you constructive criticism that you did not ask for?... do not listen to a word.  Listen only to those who encourage you and to those who have published.  If you’re a writer, then you should be writing.

9.      Some of the most important support you will ever find will be author groups including and most especially ones on facebook.   Find authors who have published, not those folks who’ve talked about doing that for the past twenty years.  There are thousands of great authors out there who will help answer any question you have, and for free.  Find many of them.  They value your opinion and knowledge too.   Ask them what their experiences have been with companies, before you shell out any money’s to someone telling you what they can do for you.  Some are very worthwhile, and professional; many of them are a complete scam.

A:  Yes, the sequel is due out in December.  I don’t do spoilers, so my answers will be vague.  My readers will understand what I’m talking about.  I don’t want to ruin it for anyone.
1.      He doesn’t stay where he is for all eternity.
2.      The second book begins in the desert, with a delivery truck… out in the middle of nowhere.  Soon enough, there is gunfire.  That’s the beginning.
3.      Both doctors (the one who made that static filled call to Lamont near the end, as well as the one who had disappeared) have not yet been caught.
4.      I will be introducing militant events into the second book (in Blind Veil, I had actually written a civil patrol chapter as well as another involving military personnel; some of whom were in the CIA chapter.  However, those were cut from the book.  You will meet those same military characters in the second book).
5.      The story is unnerving, and scarier than Blind Veil.
6.      It is action packed.
7.      Readers will enjoy some clarification on things like the I-chain and such.
8.      You haven’t seen the last of Officer Campbell, who is no longer a cop, or Cartelli, who still is. 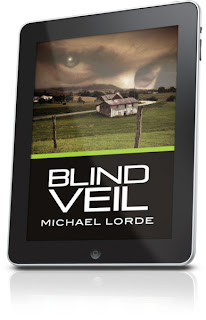 Where you can Purchase Blind Veil:

Posted by Reflections of a BookWorm at 2:19 PM